Al-Quds University celebrates its first graduates from the Dual Studies Program. The success of 37 students of Information Technology and Electrical Engineering was recognized during a graduation ceremony on 13th of February 2020 on the main campus of Al-Quds University. About 50 % of the graduates have already signed an employment contract with a Palestinian company.

Professor Imad Abu Kishek, President of Al-Quds University, congratulated the graduates and emphasized the programme’s success: “The dual studies program is the first of its kind in the Arab world, several Palestinian and Arab universities have been inspired by it”.

By now, 336 students enrolled in four dual study courses on Business Administration, Information Technology, Electrical Engineering, and Industrial Engineering. The program closely coordinates academic theory and workplace-training. Students switch between both trainings every three months during their four-year studies. For the practical training, the students sign a contract with a Palestinian company which pays a small salary to them.

During the ceremony Mr. Michael Herold, Acting Head of Mission at the German Representative Office in Ramallah acknowledged the Program: “Germany is proud to have contributed to establishing this successful project. The engagement of the private sector is crucial for its success and I am therefore very impressed to see the commitment of over 200 partner companies.”

Dr. Ihab Qubbaj, Palestinian Deputy-Minister of Higher Education and Scientific Research, appreciated the approach of Al-Quds University for Palestine: “This program contributes to providing solutions to the challenges the higher education system in Palestine is facing. The program aims to bridge the gap between education outcomes and the needs of the labour market.”

Speaking on behalf of the graduates, Ghazal Salama, a dual study graduate in electrical engineering, emphasized the experiences she and her fellow students had gained during their studies: “The program has contributed greatly to building my personality and enhancing my self-confidence as well as giving me more opportunities as a female engineer in the labour market”.

Representatives from GIZ, KFW, Ministry of Education, Palestinian and German private sector partners, the university’s vice presidents, deans, faculty, staff as well as the graduates and their families attended the ceremony. After committing to the graduates’ oath, the graduates received their certificates.

The Dual Studies Program at Al-Quds University has been supported by the joint GIZ- and KfW-project “More Job Opportunities for Palestinian Youth” (MJO) since 2015 on behalf of the BMZ. The project is part of the BMZ special initiative MENA designed to stabilise and promote development in North Africa and the Middle East. Through more than 80 projects, this special initiative is helping to open up economic and social prospects for people in the region. 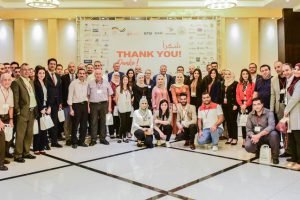 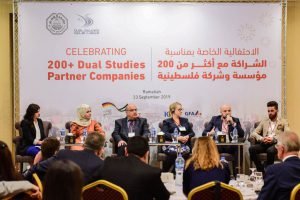